skip to main | skip to sidebar

Update on Tutova Pediatric Clinic: While we've remained optimistic that the Clinic we all love would persevere, we learned this afternoon that indeed, the hospital will be repurposed as a seniors’ facility sometime after April. However, Global Volunteers' Romania Program will continue as we follow the children to new facilities, and extend our care to others as always.

All our Romania teams remain intact. We'll post additional new information as it comes to us. A directed email is being sent out to all Romania volunteers.

Repeat Romania Volunteer Diane F. was kind enough to share her thoughts and reflections with individuals seeking volunteer opportunities on GoAbroad.com. Read on to enjoy Diane's inspiring words and FEEL her passion! You can also use the link below view all Global Volunteers Testimonials on Go Abroad OR add your own!

I have been to Romania twice so far to hold, love, care for the children. The following is what I gave as my journal entry one day while volunteering. It is taken from an organization called Peace of Mind and I quote:

"We all hear the voice that calls us to action. It is weak in some and strong in others. I would be surprised if I heard anyone say they had never experienced it. Maybe it is a defined calling to some vague tugging at our heart that makes us restless. But is is there, in one way or another, at one time or another for all of us. The question is what do you do? We are pretty good in our world at silencing that voice. We come up with all kinds of reasons not to listen. I don't have time. There is nothing I have to offer. Maybe I would if I had a little more money. When restlessness comes knocking at your door, you have a choice. Maybe you turn and look at the door. Sometimes you stand at the door and ask who's there on the other side. Sometimes you even have a conversation with the voice on the other side. But then you have to make a choice. I've felt life changes sneaking up on me in the past, and I have been reluctant to answer. The easy choice is to move away from the door and go back to your comfortable chair, pick up your book and keep reading. But what happens if you reach out for the doorknob? What happens if you open the door and walk through? There's just one way to find out."

I reached for that doorknob, opened the door, walked through and have never had any regrets.


Use this link to see all Global Volunteer testimonials OR add your own: http://www.goabroad.com/providers/global-volunteers/testimonials


Thank you, Diane, and thank you all for your interest and support!! 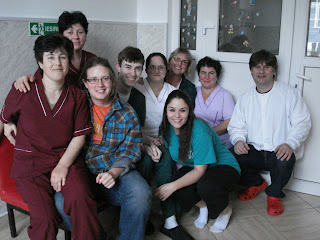 Check out our wonderful Team 160 volunteers & Country Manager Dan with the Tutova Clinic staff ~ with one or two folks missing... every pic needs a photographer, right?!?

Which team will you be on? Global Volunteers has over one dozen volunteer teams scheduled for Tutova in 2011 and we would LOVE to have you join us! Please call us today if you have questions at (800) 487-1074. You can also find program details and dates on our website!!

Posted by Global Volunteers at 12:10 AM 0 comments

First things first, Happy Birthday Mom!! Today, March 1, is celebrated by Romanians as looking forward to spring. I believe that call it Martie. Traditionally, men or boys give small pins with red and white ribbons to girls or women in their life. The ribbons have a small trinket attached, like a butterfly or a bear. Dan did not let us down, he arrived this morning with one for each Yoko and I. He gave one to each of the staff and they were happy. They had them pinned on their shirts along with others that they may have received.

I also got my fingernails painted bright Barbie pink by Coca this morning. For those of you that know me, yes, it does look a little strange. If I paint them at all, it is usually clear or French. Coca had hers done and was excited that I agreed to let her do mine. Sarah, didn't I do this last time too?

This morning I played with the younger toddlers. We were in the "preschool room". I got out a few puzzles. Daria just laid with her ear on the one that makes animal noises when you put the correct puzzle piece in its place. She will pull herself up and walk from place to place, she will even stop and change direction in the middle of the floor. Cristi usually doesn't like me to hold him, but today he found his way into my lap. I was sitting cross-legged and he laid across my legs on his tummy. I would turn him over and tickle him. He would laugh and laugh. I would let him turn back over, only to turn him over again and tickle him. Andreea (the twin) wants what everyone else has, she will go up to anyone and take whatever it is that they have. If you try to distract her or tell her no, she'll drop to the floor in dramatic fashion. Speaking of the twins, Venitsia (one of the aides), told me today how she tells them apart. Andreea has a small gap between her front teeth and Roxanna does not. I know they have other ways to tell them apart, but that involves taking their clothes off. I think one of them has a freckle on their shoulder. Celine seems to know the difference too. I also think the aides try to put Andreea in pink and Roxanna in green.

Speaking of Celine, she went to Bucharest yesterday to see a neurologist, only to find out the Dr. was ill and not seeing patients. I guess the office didn't think to call patients, even those traveling 5 hours. Gina, a nurse, went with and they were back late yesterday afternoon. KELLIE, Celine asked about you. On Monday afternoon we were in the big playroom and she kept saying something to me. I finally realized she was saying your name like a question. She wanted to know where you were...I told her Kellie, Pa, Casa...That is about the extent of my Romanian. She was missing you!!

Yesterday Petre threw up. He had been running a fever and they were giving him some medicine. I think he gagged and that is why he threw up. In the afternoon, while the others were napping, Andreea was in the kitchen. I didn't think she looked good, I went to feel her forehead and she threw up. I was able to get out of the way for most of it. She apparently was running a fever. I don't think they had the stomach flu, I just think they didn't feel good. I also think 2 year olds just barf.

Ok, back to today...in the afternoon I was a student in the preschool. I like hanging with them in the afternoon when Malika is there. When she says words and wants them to repeat it back to her, I do it too. I'm learning counting, animals, songs, objects, among other things. I wish I could retain more of it though.

The Dr. was at the clinic this afternoon. He saw several of the toddlers, maybe due to their barfing yesterday or just a checkup. I have seen him several times checking on Nicoletta and Ion.

Oh, and Malika brough Yoko and I a gift for Martie too. It was so thoughtful!

Mihaela is bringing some food for us to share with the aides tomorrow at lunch. I know they are good cooks and I like to think of it as a team building exercise. We are team, even with the language barrier, I think the lunch is a good idea. I wish we would have done it when we first got here. Next time!

I think I told you I built a snowman on Sunday. The snowman is still standing, but lost his scarf. I guess someone needed it more than him.

I can't believe I have only a few days left, it seems like I just got here.

P.S. I am now accepting donations for an extended stay.

Posted by Volunteer at 7:56 PM 0 comments

Leave Your Mark on the World!

Global Volunteers is a private, non-profit (501C-3) tax-exempt organization working at the invitation and under the direction of local leaders to deliver the 12 Essential Services to partner communities worldwide.Learn more about us here: Global Volunteers